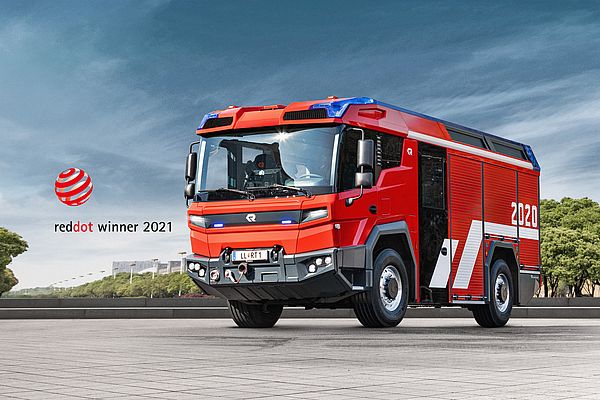 Rosenbauer's RT (Revolutionary Technology) is one of the resounding winners of the Red Dot Design Award 2021. The technologically pioneering firefighting vehicle was recognized for its outstanding design and now bears one of the most prestigious international design labels, just like Rosenbauer's PANTHER ARFF vehicle or L32 aerial ladder.

Form follows function
The RT is the world's first firefighting vehicle with electric drive. The topic of E mobility played an important, but not the decisive role, in the development. "Instead, the elimination of the mechanical power train gave us the opportunity to realize a vehicle architecture that could be thought out exclusively from the function," says Michael Kaiser, Head of Global Product Management, Innovation & Marketing. "We have completely abandoned the classic design of firefighting vehicles and have consistently subordinated the entire vehicle to this functional focus. Seen in this light, the RT is not a further development, not a new generation of an existing vehicle type or model range, but provides an independent and trend-setting answer to the question of what the firefighting vehicle of the future will look like," says Kaiser.

From a single mold
The RT is first and foremost a vehicle from a single mold, not a hybrid of base chassis and bodywork, connected by a frame construction. This keeps its dimensions very compact (7,200 x 2,350 mm with a 3,800 mm wheelbase) and has allowed the silhouette to be "streamlined," giving it its futuristic look. The great design line is emphasized by the innovative scene lighting made of high-performance LED strips integrated into the roof gallery. The shapely cab superstructure with new, angular rotating beacons and the corresponding rear closing also underscore the forward-looking design approach of the RT, as does the substitution of the rearview mirrors with modern cameras (optional).

Designed for ergonomics
Compared to today's comparable firefighting vehicles of the 18 t class, the RT is significantly lower and narrower, but offers an undiminished amount of space for crew and firefighting equipment. The entire vehicle architecture is designed with ergonomics in mind. This means that the crew cab can be entered safely without climbing stairs and also while walking, because the RT can be lowered to approx. 260 mm above ground level at the operation site. In addition, the loading height is reduced when the vehicle is lowered, so that all the equipment carried in the vehicle can be removed from the ground and stored again with a safe footing.

A look into the crew cab reveals the next major difference to the previous design. The driver's cab and crew cab are no longer separated by a "wall," but instead form a functional unit, which does more than just transport the crew. It becomes a mobile command center where operational meetings can be held in a quiet atmosphere, protected from wind and weather. Part of the crew sits on the sides of the vehicle facing each other, while the driver and front passenger can turn their seats inwards, enabling interaction and communication never before seen in an emergency vehicle.

Digital workspace
With the RT, the digitalization of firefighting operation is also gaining momentum. This is evident from the 17" touch display alone, which is installed centrally in the cockpit and can be used to control practically all of the vehicle's functions, from the lighting and the warning devices to the pump. A secure Wi-Fi, which the RT sets up itself and can be used for wireless control of robots, drones, and other firefighting equipment, ensures networking at the operation site.

Maneuverable and quite nimble
The compact design gives the RT a high degree of maneuverability, while the electric drive gives it an agility previously unknown in municipal firefighting vehicles. Two electric motors generate a system output of 360 kW (490 HP) and up to 50,000 Nm cumulatively at all wheels. A two-speed gearbox ensures that the full torque is available even when starting off on steep terrain. Thanks to its low center of gravity - the 550 kg traction battery is installed in a core tube frame between the axles - the RT exhibits very stable handling even when cornering rapidly and off-road. The specially developed independent suspension enables a significantly greater steering angle and smaller turning radius than conventional all-wheel-drive vehicles. And with the switchable rear axle steering, the RT can be maneuvered with so-called crab steering even in the tightest of spaces.

From Rosenbauer's point of view, the RT marks the beginning of a new era in firefighting vehicles. It combines everything that will be important in the firefighting operations of the future: a highly ergonomic vehicle architecture, a future-proof drive, an innovative operating concept, and comprehensive connectivity.